Kinds of Sentences: The Simple Sentence

There are three kinds of English sentences that can be used to add variety to a text. These three types are: simple, compound, and complex sentence. Obviously, among these three, the most basic is the simple sentence.

What is a Simple Sentence?

This kind of sentence is composed of a single independent clause.  It must contain at least one subject and one verb, and must have a complete thought.

The Lannisters won the war.

Pokemon Generation II is the best.

The internet and bacon are the greatest inventions ever.

Ryan and Judy love each other.

Eunice approached the kid and gave him a slice of pizza.

Simple sentences can also be as short as these:

In these examples, the subject is “you,” although it is not actually stated. Simple sentences such as those stated above express a complete thought  even without explicitly stating the subject.

What is a Compound Subject?

Just to make sure that everyone’s on the same page, the term “subject” will be defined first. A subject is a noun or a pronoun that serves as the doer of the action word (verb). It simply refers to what the sentence is all about.

As previously mentioned, a simple sentence must have at least one subject. If the simple sentence has more than one subject, that sentence is said to have a compound subject. These two or more subjects are combined with the use of conjunctions such as: and, nor, neither, and or.

Chips and candies are not good for your health.

Either the faulty wires or the stove caused the fire.

What is a Compound Verb?

Just as there is a compound subject, there also exists a compound verb. Before talking about what a compound verb is, the term “verb” will be first explained. A verb is simply a part of speech that demonstrates a form of physical or mental action, or a state of being. The purpose of this verb is to help in modifying the subject in the sentence.

A simple sentence only needs at least one verb, but sometimes there are two or more verbs in a single sentence, which is called a compound verb. This happens when the subject of the sentence does two or more things. Sure, you can just write these things down into two separate simple sentences such as these:

Jack shot him in the head.

However, it will be much better if you could just incorporate these two sentences into a single simple sentence, especially that they have the same subject which is “Jack.”

The resulting simple sentence will then be:

Jack grabbed the gun and shot him in the head.

In the example above, the two verbs are joined with the use of the conjunction “and.” You can also use other conjunctions such as: either, or, neither, and nor.

What are the Different Ways to Construct Simple Sentences?

Take a look at these recipes for some of the possible structures of simple sentences: 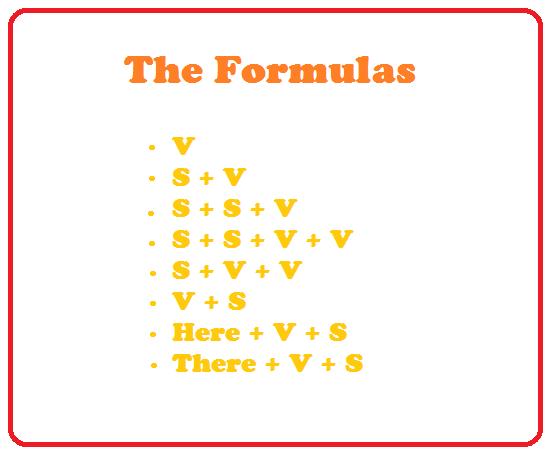 In these formulas, the letter “V” stands for the verb, and the letter “S” represents the subject.

In this sentence, the verb is “lower” and the subject is “you,” which is not stated. It follows the first formula.

This sentence follows the second formula. The single subject is the underlined word, while the single verb is the italicized word.

This example follows the second to the last formula in the picture above. The italicized verb  comes after the word “Here,” and the verb is then followed by the underlined subject.

Using simple sentences in compositions is a great way to maintain the attention of the readers. If all of your sentences are too long, the tendency is that the audience will easily get tired of reading your work, or confusion might arise. Aside from that, you can also make use of simple sentences to add an effect to your write-up. However, despite of these positive things, you still need to be careful in using this kind of sentence for too much of its use can make your composition sound “choppy.”